Gods and Heroes: Masterpieces from the École des Beaux-Arts

There is an amazing exhibit at the Oklahoma Museum of Art, “Gods and Heroes” which offers masterpieces from the Ecole des Beaux-Arts, with approximately 140 paintings, sculptures and works on paper dating from the seventeenth through the nineteenth centuries.  The part of the exhibition I consider so relevant is the focus on the legacy of one of the finest institutions for the instruction of art, the Ecole des Beaux-Arts. According to Art Curator Jennifer Klos, “(It’s) not just for Francophiles. This is really a look at almost the history of Western art.”  The exhibition offers insight into the development of an aesthetic ideology that fostered some of western art’s most magnificent achievements.

“The legacy of the École des Beaux-Arts cannot be overstated,” said Oklahoma City Museum of Art President and CEO E. Michael Whittington in an email. “Until World War II, Paris was the center of the art world, and generations of American artists made their pilgrimage to study at the École. To have this great collection with its star-studded cast of artists now coming to the United States is a once-in-a-lifetime opportunity for the people of Oklahoma.”

Fragonard’s Jeroboam Sacrificing to the Idols (1752)

The Exhibition’s focus will be on epic themes such as courage, sacrifice, and death, as well as the ways that changing political and philosophical systems affected the choice and execution of these subjects.  Their ideology was rooted in the study of the idealized human form as envisioned in classical art.

The Exhibition features artists such as Jacques-Louis David, Jean-Auguste-Dominique Ingres, François Boucher, Nicolas Poussin, Albrecht Dürer, and Rembrandt van Rijn. Most of the works have never been shown outside of the school, which continues to train artists. While the earliest painting dates from 1648 and the exhibit spans two centuries, it also includes two classical Greek sculptures used as a teaching tools. The show’s title, Gods and Heroes, comes from the epic stories in the Bible, Homer and other classical sources that the student artists were assigned to depict in their paintings. “It’s not only the epic nature of the stories, but it’s also how really the school itself became epic, with its influence on the history of Western art. In a way, all the artists at the Ecole become gods and heroes themselves. They become these sort of figures that represent and reflect the prestige and the genius of the school,” Art Director Jennifer Klos said. “France was so influential and set such a high standard for this rigorous academic training that it really established the profession of being an artist.” “There will be a wide variety of art, but we’re not only looking at the art. We’re looking at this idea of what was it really like to be a student at the Ecole.”
There are some great photographs of the school itself and artists, and you get to see this camaraderie and you get to understand a little bit more about the architecture and the surroundings of the school. We really want our visitors to be able to kind of put themselves in the shoes of the artists.” “With this exhibition, there will be an emphasis on the academic curriculum of the Ecole … and drawing truly was the cornerstone of their academic study at the school. To master drawing, you really had to master the human body, particularly the nude male body,” Klos said. “You will be able to tell how they studied movement, how they studied musculature, the body in different settings, to master not only these parts of the curriculum but elements that also became competitions.” By the 19th century, École students were competing in various contests like the painted torso and expressive head competitions, which pushed the aspiring artists to master aspects of anatomy, perspective and landscape compositions. The contests prepared them for the most prestigious of all: the Prix de Rome, whose winners were awarded a scholarship to study the ancient and Renaissance masters in the Villa Medici in Rome for as long as five years.

Pierre-Charles Jombert’s (French, 1748-1825) 1772 oil painting “Apollo and Diana Killing the Children of Niobe” is among the more than 140 paintings, sculptures, prints and drawings featured in the traveling exhibition “Gods and Heroes: Masterpieces From the Ecole des Beaux-Arts, Paris,” opening Saturday at the Oklahoma City Museum of Art. Photo provided by the American Federation of Arts

Putting yourself in the shoes of the artist is a great idea for this exhibition and it’s legacy for today’s artists.

The Ecole des Beaux-Arts was founded in 1648 by Cardinal Mazarin with studies in architecture, drawing, painting, sculpture, engraving, modeling, and gem cutting. The school was born out of the legendary Académie Royale de Peinture et de Sculpture, founded in 1648 under King Louis XIV.   The École des Beaux-Arts was a competitive, government-run school that trained artists to meet the needs of royal, state, and church patrons from the late 17th through the mid-19th centuries,  to guarantee a pool of artists available to decorate the palaces and paint the Royalty.   It was made independent by Napoléon III in 1863. At the École, learning how to construct persuasive and powerful paintings from carefully delineated anatomy, expressive faces, and convincing architectural and landscape settings was understood by aspiring artists to be the route to success and recognition. 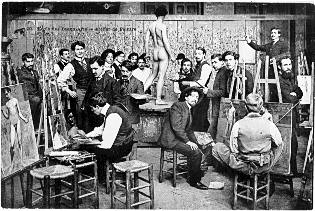 At that time the Paris art-world was made up of a triangle:

and in the middle was always the Cafe life.

The second point in this triangle was the small independent ateliers where students learned directly under the tutelage of an established “Master” who were not part of the Ecole. Students not in the Ecole trained in these ateliers with the hopes of passing the entrance exam, as well as students already in the Ecole wanting to get recognized by their association with a known “practicing Master”.

Today’s artists train at Ateliers as well.  The International Decorative Artists League is an umbrella organization for many of the independent ateliers and practicing artists.

A very fine example of today’s atelier of talented craftsmen is Grand Illusions Decorative Painting.  Creating masterpieces and educating the next generation of artists.  Pierre Finkelstein is the owner and creative force behind this excellent atelier.  He has written a bible for decorative finishes.

The third point in the triangle was the annual Paris Salon, the show everyone wanted to succeed at, and from which the public often commissioned their favorite artists.  It was the place to be seen, and get known.  Paintings shown at the Salon often posted not only the artist who did the work, but what atelier they came from and whom they studied under. It was the Paris Salon that was the culmination of a full years worth of work, both at the Ecole and the ateliers.  Not every painting was accepted. You had to submit to a jury to get the paintings shown. Over the summer break, the Masters, teachers, and students were almost all expected to leave the city, travel and paint in plein air. Every year they gather at Salon to share skills and paint together.

Charles X Distributing Awards to Artists Exhibiting at the Salon of 1824 at the Louvre Heim, Francois-Joseph (French Painter, 1787-1865) 1827

Artists still gather together at the annual Salon, which is hosted by a different sponsor each year in a different location.    Here is a wonderful blog about this years Salon in Seattle by Pierre Finkelstein. 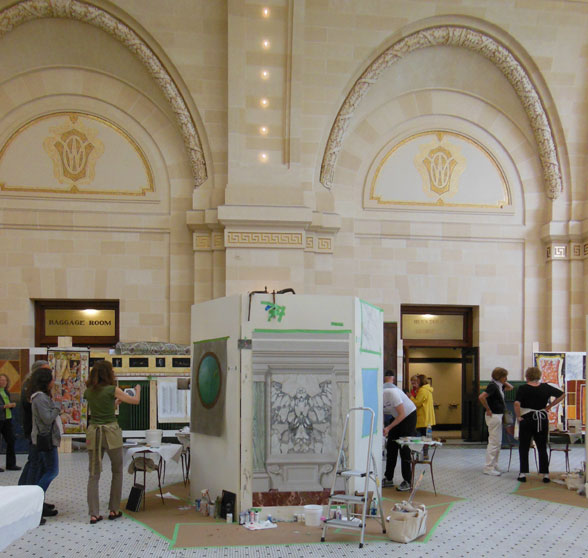 The painting Pierre completed at Salon.

He is the master of faux marble.  Recognize the pilaster from the Helmsley.  Pierre can reproduce that gorgeous agate.

Wholly aside from the discipline of painting, was the discipline of Architecture and was one of the most important studies at the Ecole des Beaux-Arts and would  influence a whole school of thought. From America came some of the best students to study and it would the Beaux-Arts that buildings such as the Boston Public Library, Boston Museum of Fine Arts, Grand Central Station, The Metropolitan Museum of Art, and many of the Great public buildings in America of the late 1800’s through the 1930’s were built.

Today, the Ecole still exists although the Architectural school was split off after the student riots of 1968.

A fabulous Beaux-Arts architectural firm, Robertson Partners is committed to excellence in architecture and design and has executed a host of projects in various historic revival styles. Most projects are high-end and range from private estate residences and other residential building types to master-planned towns and urban village centers. The firm’s motivation is to create a sense of place by responding to the site so that, by using specific architectural icons that are timeless in their meaning, the newly built environment will become a cherished part of the heritage of the community.

Our company name Beaux-Artes, reflects that classical style, philosophy and legacy.  We love offering classically designed solutions to modern intrusions such as the industrial louvered grilles for heating and air conditioning and recessed lights.  Why not make them as attractive as all the other details of the space.

“My soul can find no staircase to Heaven unless it be through Earth’s loveliness. Michelangelo The trade of creating Beauty is an honor to pursue…

Artistry, Permanent Art – Murals and Ornamentation represents the finest in Wall Decor.  The epitome of the decorative arts is now.  The artistry of today’s…

Great Products for Classical Homes is a perfect opportunity to showcase classical products and the businesses they represent.  Many of these products are on sale…

Ornate Is In, which  means More is More, Embellish and Ornament; but Why,  Where, and How. Why – Why Not? Styles come and go.  Last…

Wall Panels Day#4 "Best Dressed Walls" is one of m

One of my favorite powder rooms. A small room but

Roses, The Queen of the Garden. #roses #rosegarde

Wall Panels Day#4 "Best Dressed Walls" is one of m

One of my favorite powder rooms. A small room but

Roses, The Queen of the Garden. #roses #rosegarde

Classical Addiction LLC is a limited liability company exclusively for the Blog Classical Addiction.  I am an Artist and Designer and this blog represents my interests in promoting classical beauty for today.  I am also a part owner of Beaux-Arts Classic Products.  We design and manufacture  classic functional works of art in the USA.  The information and images provided by Classical Addiction LLC is for general informational purposes only.  Some of the images seen in this blog,  are my own and Beaux-Arts Classic Products; however, most of these are images I have found on Pinterest or other sources.  I try my best to give proper credit to the original source.  If I have an image that belongs to you please let me know and I will properly credit it or remove it.  Classical Addiction LLC is protected from liability and assumes no  responsibility for any errors or omissions in the content on this blog.

Use this form to find things you need on this site
You can add any HTML here (admin -> Theme Options -> Promo Popup). We suggest you create a static block and put it here using shortcode
Newsletter